It seems the Twin Towers never existed, but in our dreams.

I walked to work on lower Broadway one crisp autumn morning, grown-ups everywhere pointing at some speck way, way up. 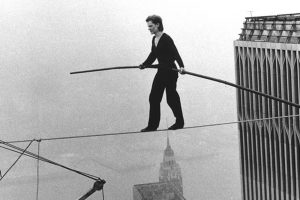 A man was dancing on a high-wire between the tops of the Twin Towers. For an hour . . . weightlessly, fearlessly. Phillipe Petit gave this and all New York shared his soaring bliss.

The Twin Towers beckoned him to “walk” to God’s very doorstep.

I was so excited two years later when my company, moved to the 92nd floor of One World Trade Center. With a shoe propped up, I would gaze, while on the phone, at the tiny tall ships in the river, small planes flying below, the Jersey plain with a patch called Newark.

You saw every day, glistening currents reaching for the Atlantic holding a little trinket: the Statue of Liberty.

Unforgettable still the one golden sunset: a spill of liquid gold conquering a gray-blue, world. Everyone was drawn to the window, as the South Tower smiled an ultimate orange.

“That’s the 92nd Floor, One World Trade Center,” I used to say on the phone, an address Caesar would love.

Spilling with the other salmon off the escalators, I’d stride across the great blue carpet to a tall mighty elevator that zoomed to the 78th floor. (I once walked right into my own image in the mirror-like side panel!) .

This sky-borne mansion groaned and swayed. Lightning lashed it. “Towering Inferno” was at the movies. 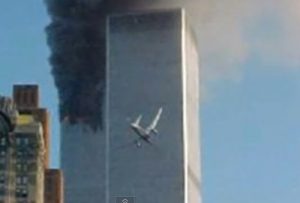 Then I saw that day on television that wild, black horse of a devil-stew crashing to earth, crushing thousands of people unto dust too soon and wrong – and I was remembering.

Forty people on the 92nd floor at 10:26 AM were breaking windows where my desk had been as flames approached. Then at 10:28 came the black horse.

The Twin Towers, fulfilled their mission, returned to the gods, now just a memory and a hole where there was greatness and grandeur. They were a strange god that inspired one man to fly like a bird, while thousands swooned; and transfixed a few to blow it all to hell while billions wept.