At the toll booth at Trenton around nine at night, May, 1982. Dark, a silhouette of a big road warrior hotel about a mile away, the sickly light of the bank of toll booths is over my shoulder. No rides.. Hitching after dark always brings out monsters, they probably think. I’m hitching from New York after hitching all day to there from my sister’s place in Boston.

It’s Friday evening, the blonde guy who drove me there from the foot of the ramp to the New Jersey Turnpike in Hoboken worked in the World Trade Center, about mid-twenties, starched shirt and tie. Mentioned en route here that he had taken some quaaludes and was feeling pretty, ah, you know? I hadn’t learned diplomatic thank you’s yet as a three month old hitch hiker. About three times he reached down to the stick shift in his little car and twice I noticed he let his hand brush infinitesimally on the left upper thigh of my jeans. Years later I thought, “Don’t wear tight jeans when you hitch. Don’t hitch at night.” The long, spirited Mr Chips scarf might have sent the wrong message to motorists sizing me up. I get the horny guy.

As I had gotten out of the car with a kind of studiously detached demeanor, I shown him all my agape love and acted deaf when he said: “Please.” He finally said he wanted to have some sex. Oh. “Thank you, but no thanks. Take care. Bye.”

So I was prepared a little for Chris who pulls up in this big heavy breathing, red horndog American-made monster, sparkling new. Later I figured someone rented it – but not Chris.

I get in, say “Thank you.” Say my name, where I’m going, to defuse things. Chris is about mid-twenties, short blonde hair, in jeans and a short sleeve top. Kinda attractive.

“I’m Chris.” She said, not listening, looking out the back and saying out loud to her self. “The state police are lookin’ for me.”

It seems “Ebony and Ivory” bathed our front seat as we rolled south, for me McLean Virginia, she Aberdeen, Md., where, she explained, she needed to get there to get some heroin, which she injected into her neck. She was really needing. Someone told me later that heroin addicts are pussy cats except when they’re strung out. I decided to be very nice, to help keep her centered, mellow for the trip.

The I Ching says: “Do not woo” – good advice for hitchhikers. Just being there is perfect.

We stopped at either the Walt Whitman, Clara Barton or Kilmer rest stop for gas and we sat at the counter for something to eat. Chris told me she used to be a waitress. Then, she smiled: “But now I sell my body.” Ahh. The car was her last customer’s unsolicited bonus offering, at the big road warrior hotel no doubt, where he’s deciding who to call. (His wife?)

It’s later and later. I just am quiet. After Delaware, Chris sees I’m not a customer. Her talk about wanting me to go to Aberdeen with her to see her buddies wore off long ago. She injected hers in her neck.

We both look ahead as Ebony and Ivory plays once again on the radio. “Living in perfect harmony.” Our theme song.

We commune cadenced by the pulsing yellow line.

She said something about her child who lived with her mother.

Somewhere on this spring, balmy night Chris got off at the Aberdeen exit, told me to start in the morning at the exit right up there to the right down the road to get back on the road.

Pulling my bag out of the back seat, I looked in: “Thanks Chris.” and very softly I added: “Your child needs her momma.” Somehow I think it should be called the night of the twisted but lovable blondes.

In September ’85, I headed up the Jersey turnpike, wearing big horn-rimmed glass, white pants turned up with a drawstring for a belt, and flip flops, designed to attract real trouble.

It was slow going and I’d gone only sixty miles in maybe two hours. I hitched, my thumb out, rocking on my flip flops as cars stonily passed in numbers. Taking my cheerful inviting smile as only proof that I actually liked being insane.

I also wore my striped shirt with the personally sewed-on, bright un-matching buttons, humming my assuring “My Favorite Things.” under my breath and when more tired, “Ohm mani padme hmmmm.”

Hot, very bright light, slight grade up, leading up to me across from the big rest stop in northern Delaware. Plenty of time to look me over. A sign a little too small saying “NYC.”

Then there came the one named John. I got in. “I’ve been there a long time. Thank you very much.”

“It’s the glasses,” John said. He had unkempt blonde hair, heavy physique, tee-shirt and was comfortable within an enclosed area filled with Emerson, Lake and Palmer’s album/tape – “Brain Salad Surgery.”

“People think you’re a weirdo,” he offered, throwing me just a glance, suggesting that he’d seen much worse.

He talked a lot. “Dat-a-dat-a-dat-a-dat-a.” About the first time he tried out a motorcycle, flooring to 100 miles an hour “to get out the carbon.” How dad gave him a $10,000 college loan for his tuition which – he seemed to strut sitting in the driver’s seat – he partied away in two wasted forgotten weeks of sex, drugs and rock and roll.

Almost as good as the time he went in the bar in New Orleans with the New York Giants on the tube
playing the New Orleans Saints and John told everyone that Kenny Stabler was a “faggot.”

“I’d just go up to the biggest, dumbest guy and punch him. It’d be great. We’d break chairs. But when the knives come out,” John said piously.” I leave.”

Good boy John. The huge swaggering bass of ELP’s version of “Peter Gunn” and screaming fans filled the car and sailed out on the breeze as John talked straight ahead, non-stop, his arm resting on the open window.

I noticed I said something or nothing only when John needed air. We stopped for gas at a rest stop with the Big Apple in the twilight distance. I saw John with legs moving around quickly talking up the gas guy, like an old friend.

I was going to Staten Island because he was. It was where he grew up. They’d be glad to see him I’m sure.

John thought a ride on the Staten Island ferry would round out my experience and persona well. I never argued with John. We shook hands gave each other a look meaning the trip was a real thing, worth remembering.

I tipped a wave as he roared out in reverse, in a manly way that wouldn’t disgust him. I wouldn’t know him to see him now, especially the far side of his face and body – especially if his mouth was closed.

Somebody might have to identify him at a morgue someday. I paid the famously cheap fare, hauled my bag over the turnstile and walked ahead to make the readying ferry, bobbing on the roiling ocean water, the warning horn blowing.

It had a calming effect on me. We shove off.

I stood with my upright, bag considerately between my legs, me should-to-shoulder packed tight with people, eyes down, mouths closed, affected a little by gravity – so different than my wild ride with a man almost too alive. Mannequins in storage.

The sun flashed off the great towers of lower Manhattan and the choppy waves and cool hissing mist crossed all our beholding silent faces. We rose and fell as this great dream came closer.

They all just barely noticed the guy with the horned-rims and flip flops with an army bag, involuntarily imagining what the journey was. I had El Dorado at my feet. Tomorrow I would be in Boston. 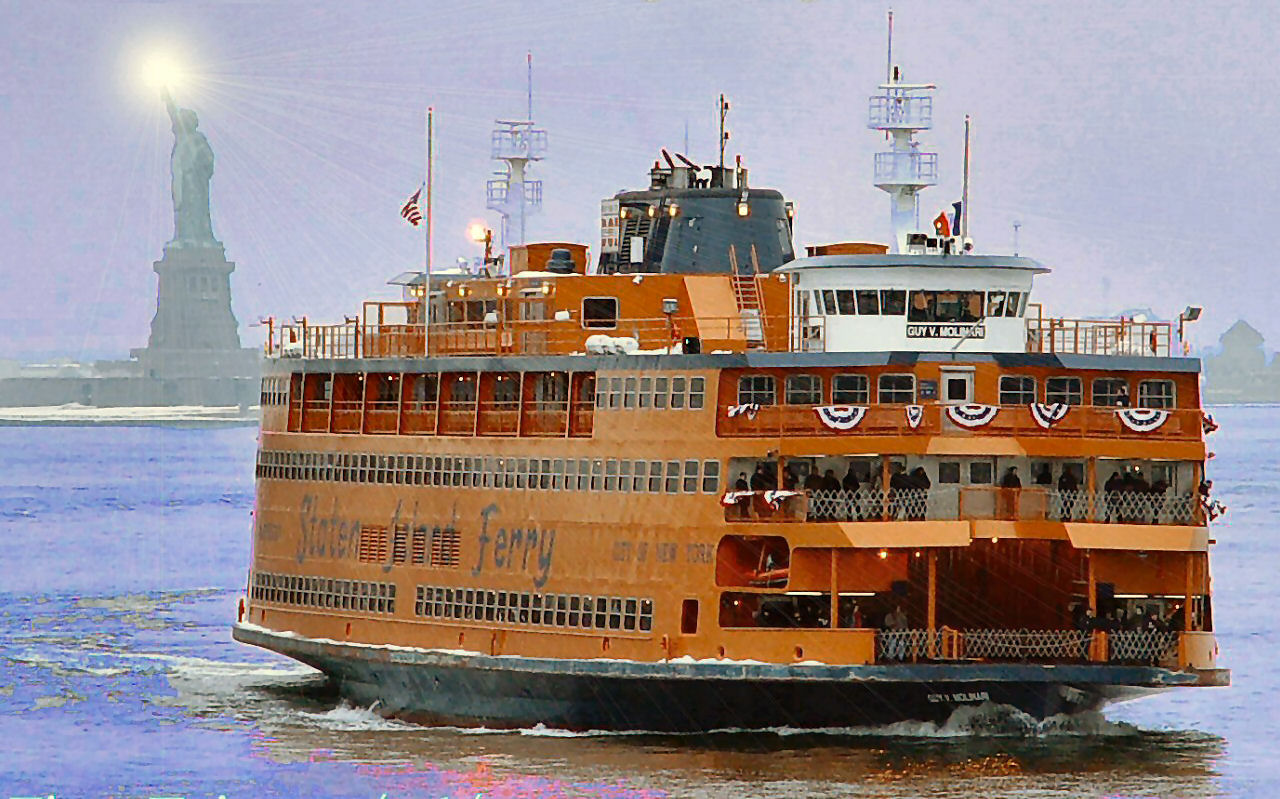